Cardano has fallen along with the rest of the cryptocurrency market but it outperformed Bitcoin, Ethereum, and many other top 20 cryptocurrencies. 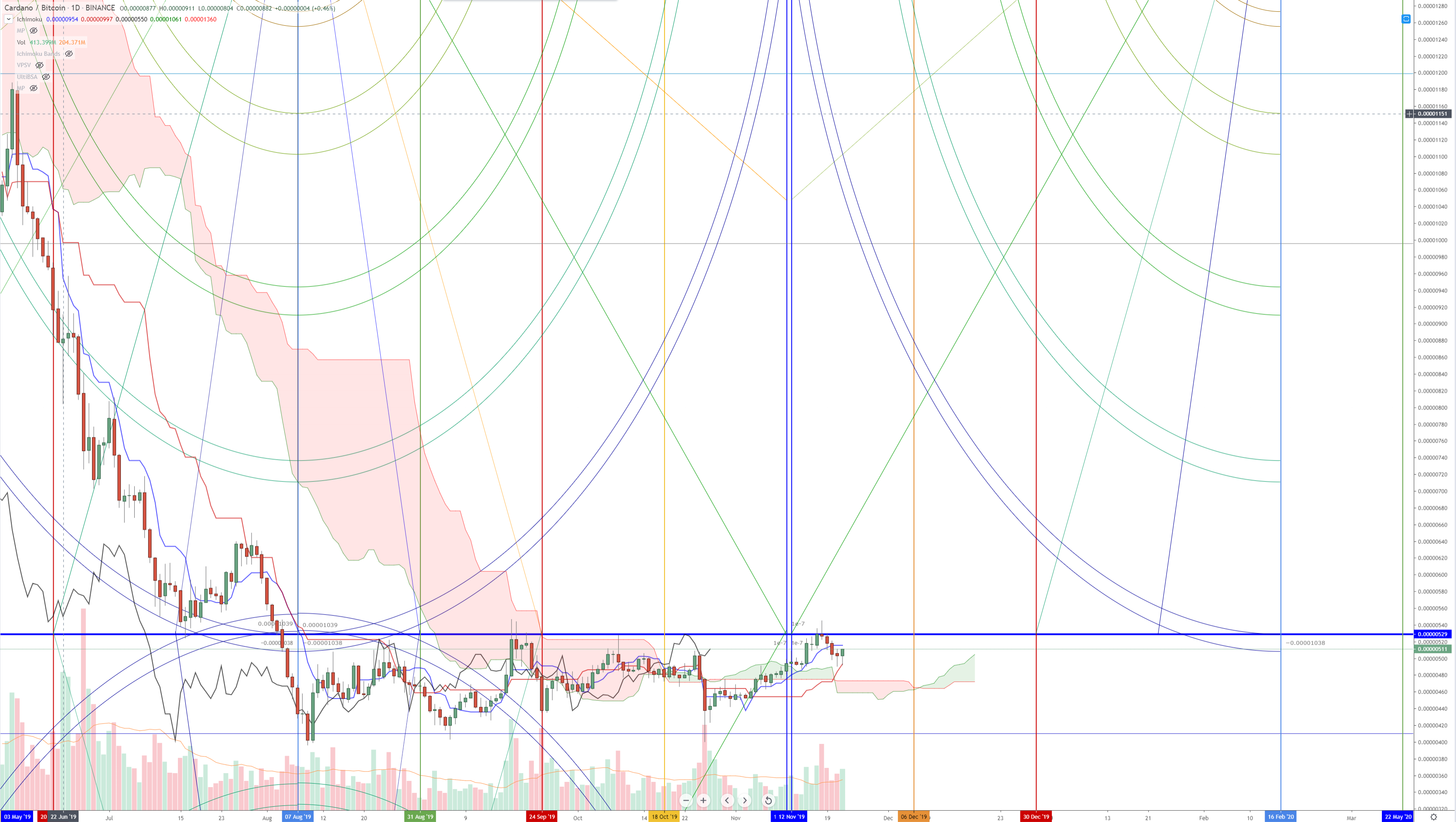 I want to point out one bearish event that happened today: new 2019 lows for Cardano (ADA). The all-time low for Cardano is back at the extreme low of the bear market on December 15th, 2018. Cardano traded as low as 0.02700 on that day. The new 2019 low for Cardano now sits at 0.03338. As bearish as that event is, there are incredibly bullish signals that Cardano has been generating. Cardano printed nearly a -13% loss at one point during today’s session (November 22nd, 2019). It has since rallied higher, to trim the current decline to -5%. And from looking at the current price action and behavior, it could very well push even higher. Cardano’s performance against Bitcoin is even more impressive. On my entire watchlist, there is the only cryptocurrency that is showing green against Bitcoin, and Cardano is it. It is presently up over +1.25% against Bitcoin, indicating a large number of people are converting into Cardano, rather than into fiat.

The chart above is one we have not looked for a while: Cardano’s Bitcoin chart (ADABTC) As you can see, Cardano has kept a very tight range against Bitcoin since finding its new all-time low against Bitcoin on August 9th, 2019. Cardano has gained as much as +37.63% against Bitcoin since the August low. The thick horizontal blue line just above price is the 0/8th Major Harmonic price level. It represents the ultimate bottom and final support for Cardano (technically, there are some harmful levels below, but I have not drawn them). Cardano has been testing a breakout above this level for the past 110 trading days. The most recent test of the 0/8th Major Harmonic was on November 18th. Look vertical lines represent the end and beginning of a Law of Vibration Cycle – a 192-day cycle. I’ve never seen a chart that looks like this live. Cardano is at the extreme perfect square of price and time. It is trading at the beginning and end of a new cycle – but also on the very final Major Harmonic level.

Cardano has never been in a bull phase – it has only been in a bear market and lost value since its launch over two years ago. But the drop is essential and the bear market is crucial because it appears Cardano has finally shifted into a condition where it is at fair value against both Bitcoin and the US Dollar. The fact that this comes right at a perfect square of price and time is not a coincidence. So what does this mean for Cardano? I am anticipating a robust and sustained bull trend for the immediate and lasting future. While there is undoubtedly some short term volatility and downside pressure that we could expect for the remainder of November and possibly 2019, the end of Cardano’s bear market is over. The Ichimoku chart also gives us an early hint that the down move is over. The future Cloud is green. The Tenkan-Sen is above the Kijun-Sen. Both price and the Chikou Span are above the Cloud – and the Chikou Span is in open space: a crazy bullish condition and the first time we’ve seen these conditions on Cardano’s daily chart since March of this year.

Save money on your currency transfers with TorFX, voted International Money Transfer Provider of the Year 2016, 2017 and 2018. Their goal is to connect clients with ultra competitive exchange rates and a uniquely dedicated service whether they choose to trade online or over the telephone.
Find out more here.